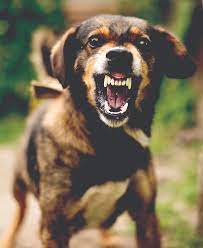 Is Your Dog Aggressive? What To Do About It

Our dogs are very important members of our family, but sometimes we forget that their behaviours reflect many centuries of instinctually protecting themselves, their territory and their food.

Snarling, growling or more seriously, even biting are indications of aggressive behaviour.

People assume that some dogs are just naturally aggressive, but this is not true. If a dog is aggressive, it’s their way of saying that something isn’t right. Before trying to correct the behaviour, first you should try to identify the underlying cause of the aggression.

Fear: When a dog feels that they are in danger, its an instinct to act aggressively. Even if it is a perception of danger, your dog may growl, bark or even bite.

Protective: Dogs instinctively protect what is theirs – This may be food, toys, their owners or their home. Your dog may snarl or snap at those that they perceive to be encroaching on their “territory”.

Redirected: If a dog is provoked or in fear, but unable to attack their aggressor they may turn on another dog or human nearby.

It’s Not You, It’s Me: Having an aggressive dog can be very stressful but it’s important to be calm as possible. When you are stressed, your dog will feed off your energy making things worse. Your own anxiety may be the cause of the aggression as your dog may think that they need to protect you.

Healthy Exercise: Many people select a dog on the look or current popularity instead of the suitability of the breed to your lifestyle. Maybe your dog needs more exercise, love, socialisation or mental stimulation. Dogs that have enough exercise can be less frustrated and will minimise the chance of them lashing out.

No More Bullying: Bigger dogs have a bad reputation, not because they are more prone to aggression, but it is scarier having a Rottweiler growl at you compared to a Chihuahua. All dogs should be treated as potentially aggressive, not just the bigger breeds.

Talk To Your Vet: When a dog is in pain, they tend to lash out. If a normally non aggressive dog suddenly changes behaviour it’s important to check for bigger issues.

Ask For Help: Aggressive behaviour does not go away on it’s own. If you aren’t able to locate the source of the aggression, it might be time to get some help. A dog trainer or animal behaviourist may be able to identify the cause.

Desexing: Desexed dogs are less likely to need to assert their dominance or to be territorial.

Don’t Punish: Punishment for aggression could potentially make the situation worse if the cause is fear further. If the aggression is because your dog is trying to be dominant, punishment can cause them to overpower you.

Quite often the cause of aggression can be resolved but firstly it’s important to establish why and look at removing the cause.

If you fear that your dog will bite another person, maybe consider using a muzzle or keeping your dog confined in situations where they may become fearful.

Call Us Email Us